What I wore,where I ate and what I did

I'm one of the very few Northern Californians who REALLY loves Los Angeles. Ask folks from the Bay and I guarantee you 8/10 will say they just can't stand L.A. and furthermore that we should split California in half and leave LA to its superficial glitz ad glam and leave us to our Tevas, our tech boom, our organic foods, and our green living. Hands down I LOVE living in the Bay, there is no place like it, however an entire fleet of self driving Uber's could never keep me from visiting L.A. if given the opportunity.

I recently had the pleasure to visit LA for a truly epic wedding. And even though it was a short trip, as expected, it did not disappoint.

First off, I'm a notorious over packer. I need to take the advice I give others when packing and"PACK SMART" Since I was only planning on being in town 48hrs I tried to take a minimal approach. 2 Tee shirts (1 graphic, one striped) 2 pairs of jeans (1 black skinny 1 blue wide leg) 1 casual dress 1 sandal 1 sneaker and a denim jacket just in case. Oh and my weeding outfit, of course.

I'm a stickler for on flight attire. I like my clothes to be easy enough to pass security without a fuss, to be comfortable enough to chill on the plane, and to have enough wearabilty to transition from plane to plans on the ground without a hitch. Since the ride from the Bay to LA is a cool 56 mins in the air I opted for a casual dress with a denim jacket just in case flight got chilly. 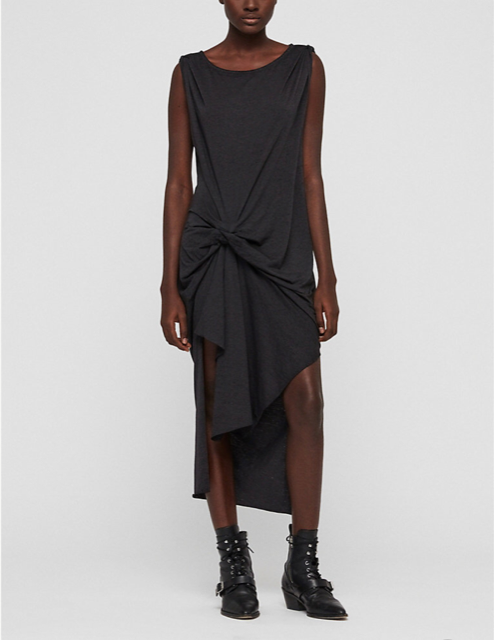 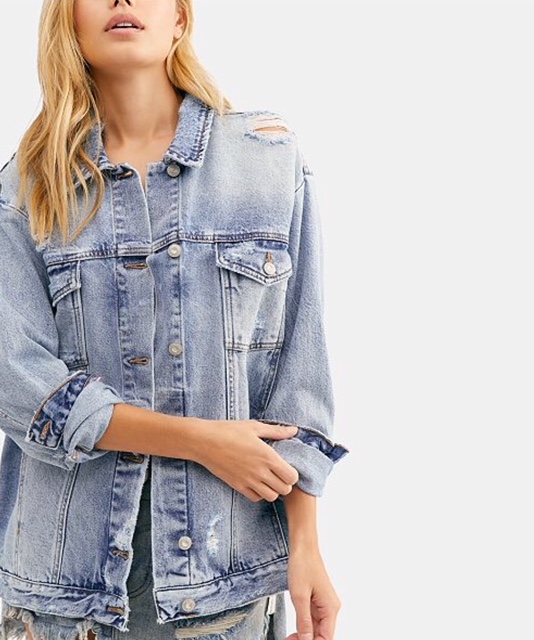 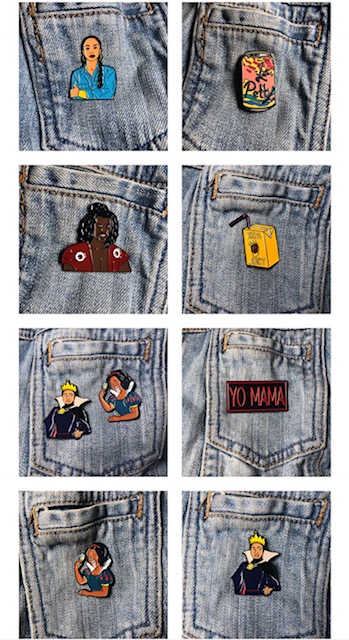 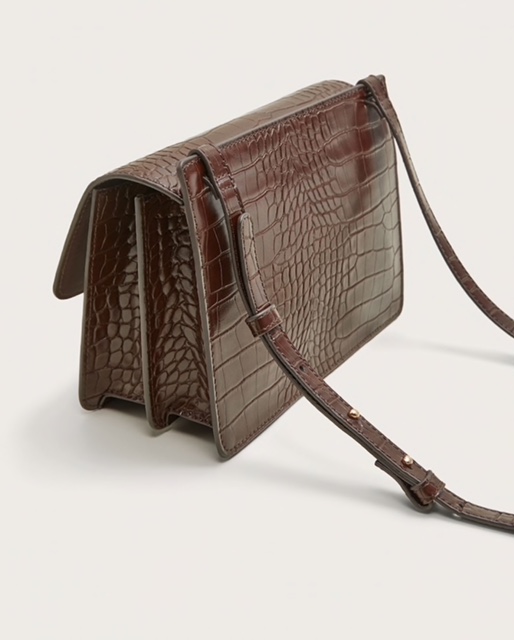 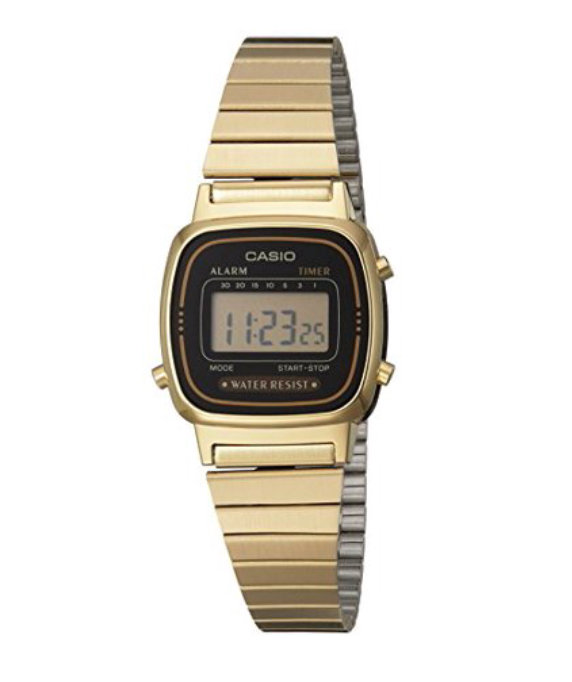 By the time we got to our Air B n B from LAX we were famished. Since we were staying in the conveniently walk-able Fairfax District we took a suggestion and got a bite to eat at Ta-eem Grill on Melrose. Word on the streets, is that Ta-eem has some of the most authentic Middle Eastern food in Los Angeles and that its so good celebs frequent there. I only have two words Hella. Good. I had the falafel. Never ever have I had falafel so light and crisp. It came with the most delicious sides of marinated beets, carrots, pickles and cabbage salad with so much naan, and hummus that I had enough left over to feed a small army. My bestie had the beef and lamb but with spicy eggplant in place of the cabbage. I should've gone with the eggplant but we both left fat and happy and Ta-eem Grill is now on my list of MUST's for future LA visits. 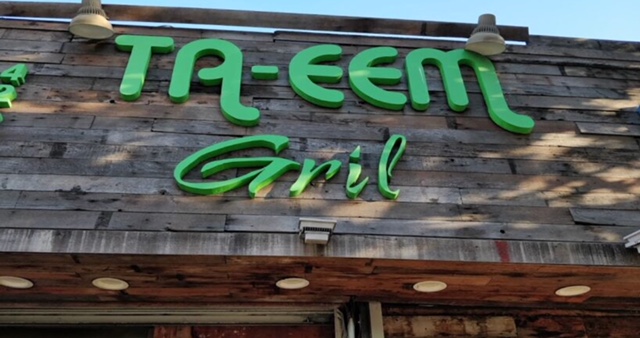 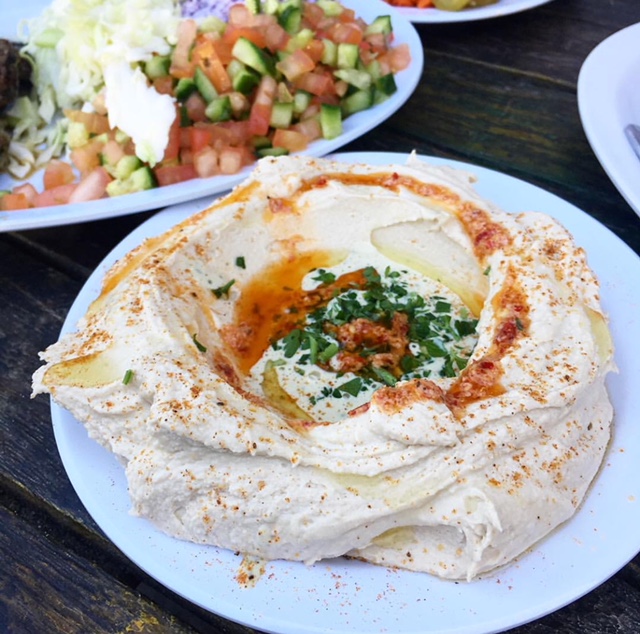 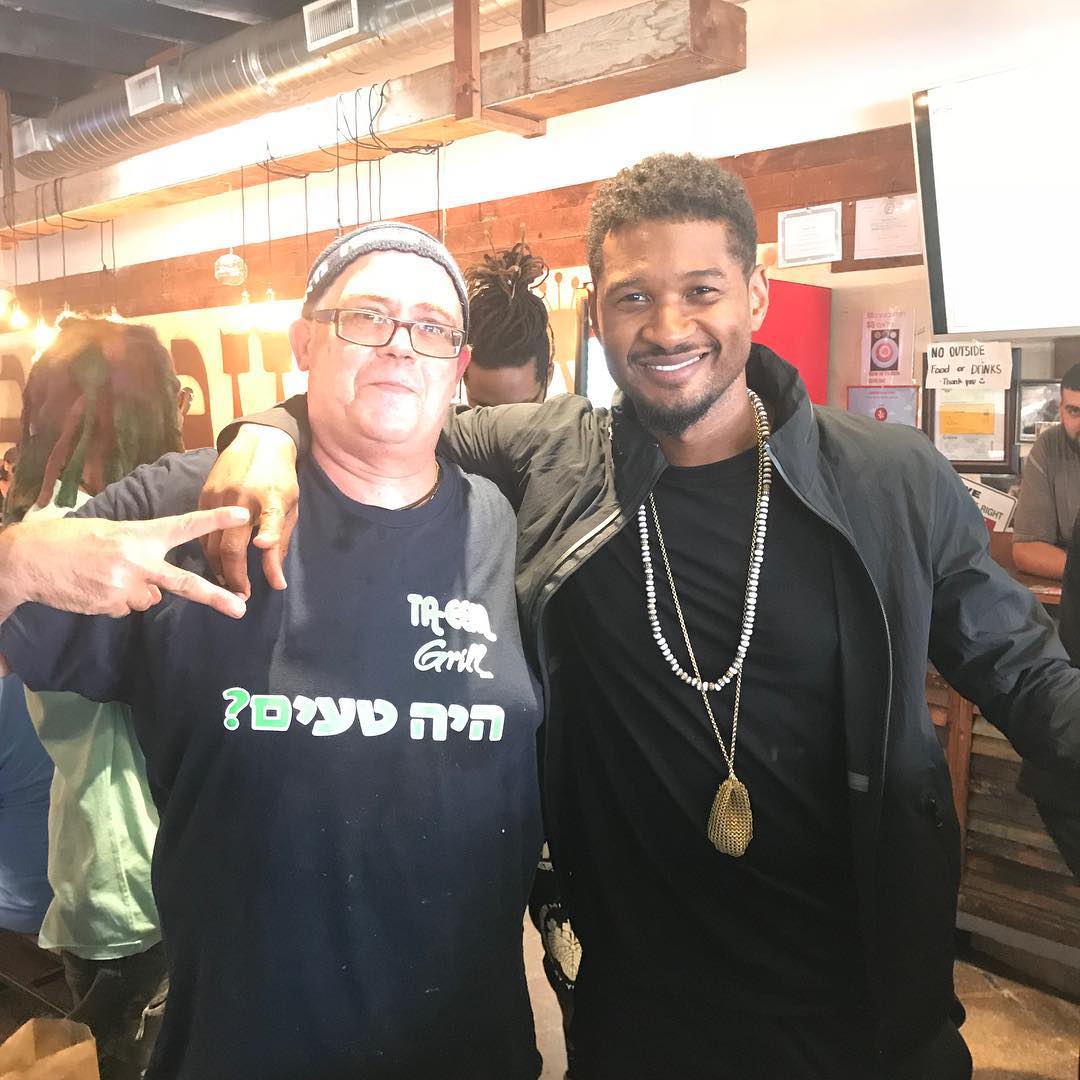 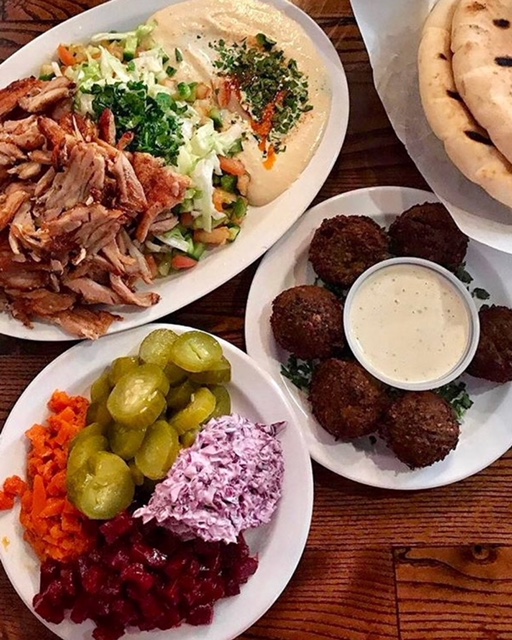 The food nearly put us in a coma, so we took a walk down Melrose and drooled over the sweetest vintage shops 3 of which were featured here on Who What Wear

By 4p we were exhausted and really had to rally to make it to our evening plans, the first stop being a rooftop rehearsal dinner party at The Kimpton La Peer Hotel in West Hollywood's Design District, then on to dinner and dessert with a dear old friend who is an LA local. Unfortunately I didn't plan so well for a swanky rooftop soiree but I threw on what I had along with a power lip in my signature color and pressed on. In retrospect I suppose I could've worn a heel however I didn't know where the night would take me and so classic Chucks it was. 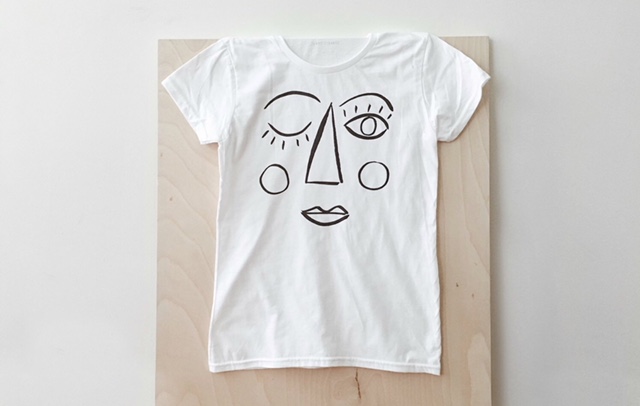 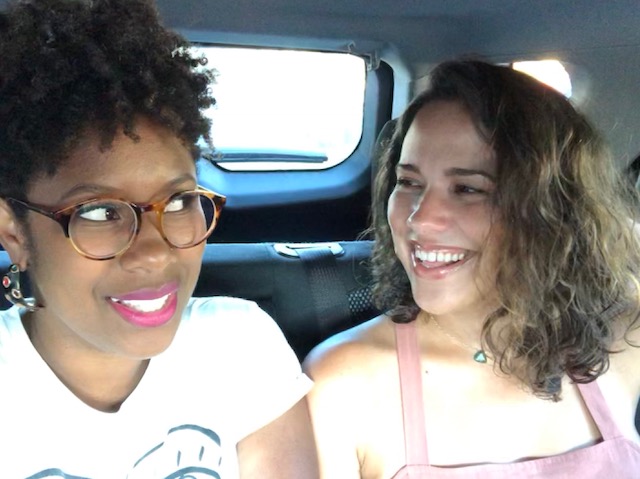 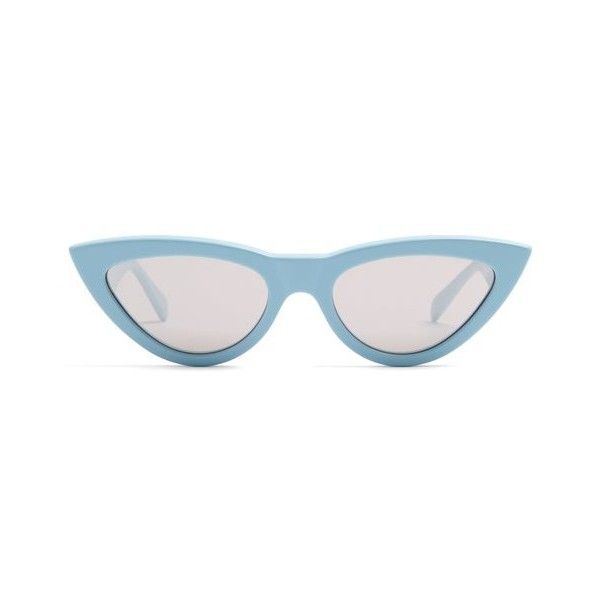 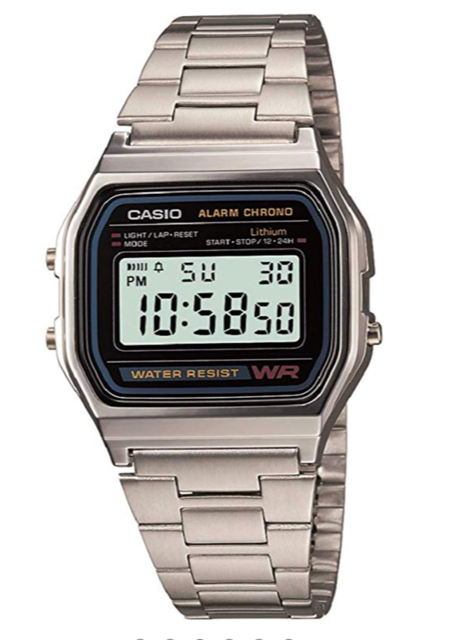 Alta Adams in the Adams district

After the soiree I met up with my friend Khari who is doing ground breaking things in LA through his collective conscientiousness platform The 333 Khari used to be my eating buddy until he left me for a life of pescetarianism. Booooo Luckily the restaurant he suggested was good for the goose and the gander. Enter Alta Adams. The HOTTEST new soul food restaurant in the West Adams District headed by Watts native, and executive chef Keith Corbin. EVERY thing on the menu was drool worthy and looked amazing but we went with the following. 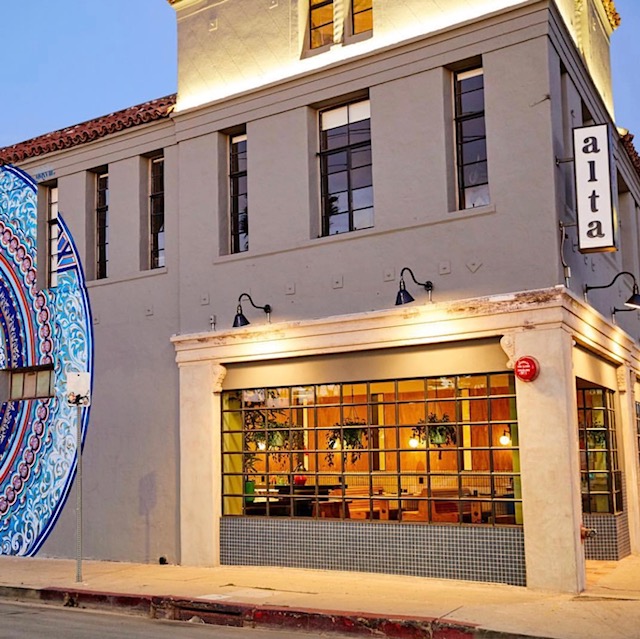 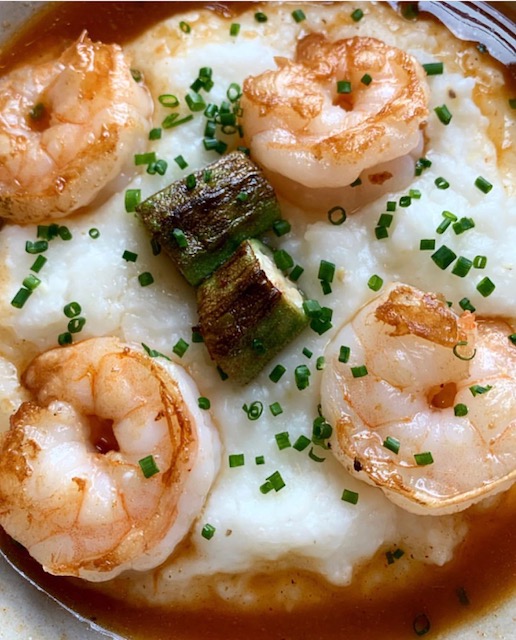 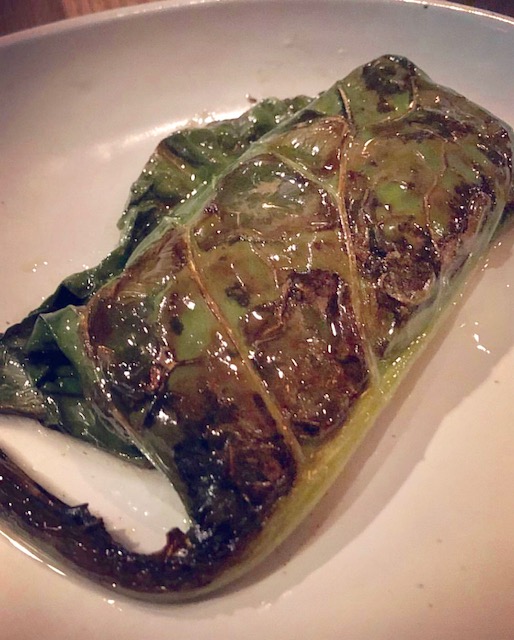 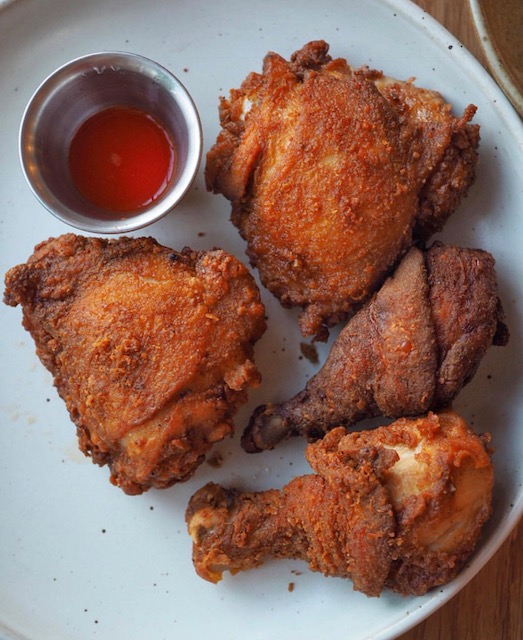 The Deviled Eggs, Mac and Cheese, Shrimp and Grits, Collards with vinegar and smoked oil and the Fried Chicken (because duh) It looked and smelled so good Khari began to question his dietary choices.

I had never been to West Adams and was hungry (both figuratively and literally) to learn about this hidden gem. West Adams is one of the oldest neighborhoods in Los Angeles, running along the Rosa Parks freeway, with most of its buildings erected between 1880 and 1925, including the gorgeous William Andrews Clark Memorial Library Apparently the area was an exclusive residential district in the late 19th and early 20th centuries for many wealthy and influential people until it underwent a period of deterioration. However many of its stately old buildings have been and are being rehabilitated and preserved and trust me when I say the neighborhood is about to hit a boom.

After dinner it was onto dessert and we were on the hunt for pie, don't ask why. We came full circle and ended up finding exactly what the doctor ordered next door to the La Peer hotel at plant based Mexican restaurant Gracias Madre. They also have one in the Bay if you want to check it out! We sat at the gorgeous outside bar and had the Peach Cobbler a la mode. The vanilla bean coconut ice cream paired perfectly with the warm peaches and cobbler crust made with a coconut oil, sugar a pure love. I had mine with a tall cold Horchata latte. Delicious. 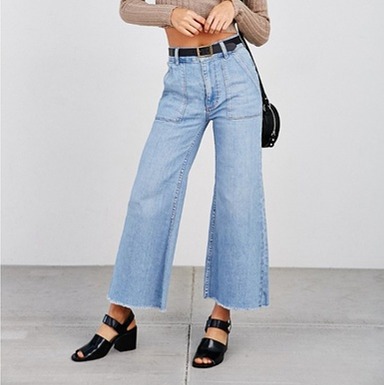 what I ate: Liquid Juice bar on Melrose

My belly was not happy when I woke up and I knew if I didn't take it easy on day 2 I wouldn't fit into my dress for the wedding later, so I opted for light breakfast...and by light I mean juice...just juice. Since we had such good favor on Melrose the day before we went for round 2. Now I wouldn't call myself sheltered however I had no clue what that when we stumbled into a blush and bashful color story at Carrera Cafe we were discovering"a scene" insta-worthy eye candy. From the gorgeous folks to the pretty pink walls to the retail area where you could purchase heart shaped pasta. And then there was me...with my left over fried chicken smell. Carrera was super cute and a selfie heaven but no juice and so we landed on Liquid Juice Bar instead.

Post juice it was back to our Air BnB for some much needed R&R before the glorious #WalkerWeeding2019. Again you can read about all that amazingness here. I thought maybe something glamorous from my old life would work for the wedding and luckily for me some things did. But alas after 3 kids some other things did not, so dress shopping was on the agenda for me. Fortunately I only went out shopping once and found "the dress" I paired it with a Janelle Monet inspired clutch from 31 Thirty Store and a few goodies I already had in the closet. See what I wore to this fabulous late afternoon outdoor wedding and reception.

There's no way you can get this tasty treat anywhere else but I thought you'd like to at least see the menu being served at this playfully decadent dinner inspired by the Brides favorite movie Indiana Jones and the Temple of Doom Honestly the food was so good I forgot to take pics, but below is my favorite thing on the menu. Dragons Breath: A passion fruit sorbet with giant Crunch Berries. YUM! 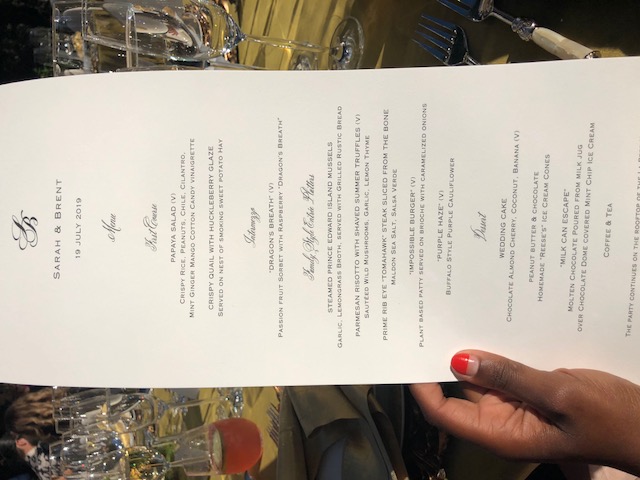 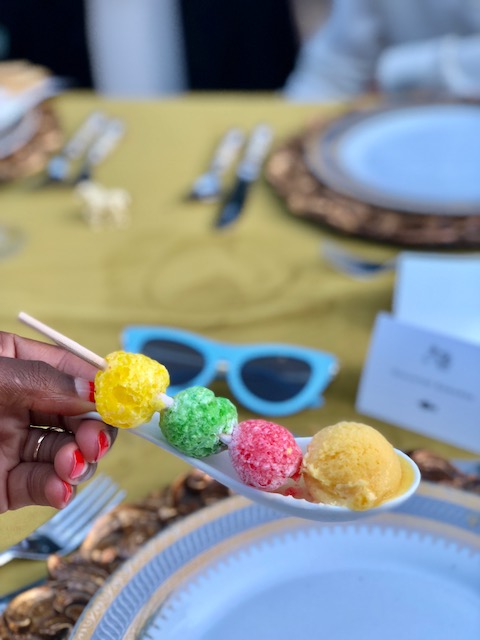 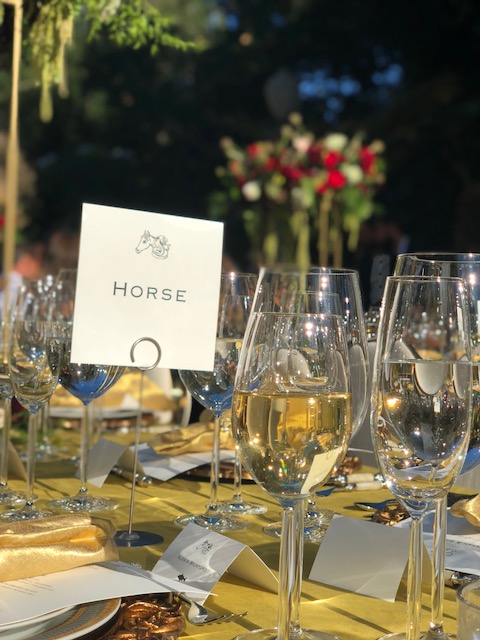 I hope you enjoyed reading about LA as much as I enjoyed being there! Maybe next time you can come along for the ride. To schedule a shopping trip with me, click here.